Do not hesitage to give us a call. We are an expert team and we are happy to talk to you.

With 6852 islands, Japan is a land covered with 70% of mountains, over 200 of them being volcanoes. Japan tour package displays an ironic land which has beautifully blended in traditions with the modern life coexisting together. Known as the Land of the Rising Sun, Japan is known for out of the box fashion trends as also for its culinary experiments which can be lived along with Veena World’s Japan tour packages from India. Even though Japan is a relatively small country, the depth of its culture and colour is immeasurable. The lively ambience of this country is noteworthy. The high tech amenities and anime culture has made an insuperable part of Japan’s true identity! Notice this remarkable drift in the culture along with any of our Japan tour package. The wonder of Japan lies in its unique blend of traditions, combining true multicultural modernity with ancient heritage along with our Japan travel packages. Veena World understands the core nature of this epic land, based on which we hand stitch the itineraries into affordably Japan travel packages. This land is truly a walk through timeline which take you to future and yet the ancient times, all at the same place!

CNB: CHILD NO BED IS OFFERED TO CHILDREN UPTO 8 YEARS

CWB: CHILD ABOVE 8 YEARS SHOULD TAKE  CHILD WITH BED

OKAYYAMA- GRAN VIA OKAYAMA OR SIMILAR 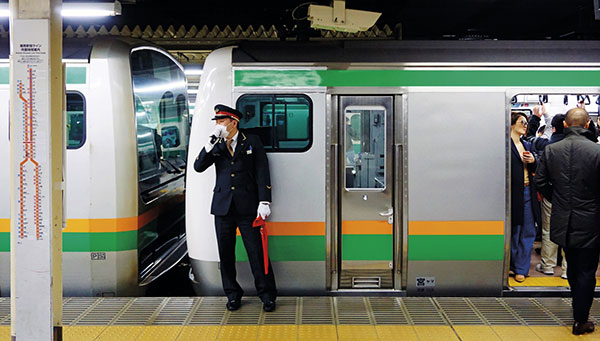 Welcome to Japan! Transfer by coach (SHUTTLE BUS) to hotel. 18H30.- Meeting with guide. Late in the afternoon, we will pay a visit to this fascinating country by taking a trip on the metro (tickets included) to the Shinjuku district and see the crowds of people who use this modern and efficient collective transport system. Shinjuku is one of the most important nightlife districts. Dinner included and return to hotel by metro with our guide. 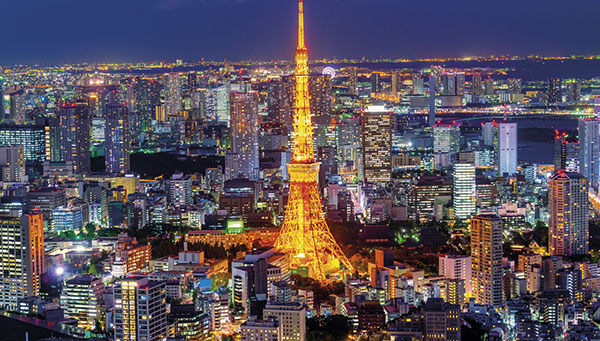 In the morning, we take part in a 5-hour trip with our guide to see this amazing city, with its hustle and bustle and extremely modern districts that coexist with quiet, peaceful areas. Brief stop at the Zojoji Temple to make a beautiful photograph of the Tokyo Tower. Pay attention to the hundred of Jizos, stone traditional protecting deities who guide us on our travels, give power to those who are weak (such children) and those in dangerous places, and who are dressed including hats, robes and windmills. Then we head to the junction of Shibuya, a junction that is said to be the most crowded in the world. The Meiji Temple is dedicated to the Emperor Meiji, his wife, and their spirits. We continue on our bus along the elegant street of Omotesando. We will edge the most beautiful part of the Imperial Palace and the gardens. Stop to visit the famous Nijubashi Bridge. We will pass through the district of Akihabara, the “electric town” with icons from the popular Japanese Manga and Anime culture and then see Kokugikan, the Sumo stadium, home of this Japanese sport. We will also visit the Buddhist temple of Sensoji, the oldest and most important temple in Tokyo, with its 55-metre high pagoda. Then we will have some free time to visit the traditional commercial street of Nakamise in the district of Asakusa. Lunch included in a local restaurant. Return to hotel.Free time in the afternoon. NOTE: During the Japanese Olympics, accommodation may be given near Narita airport. 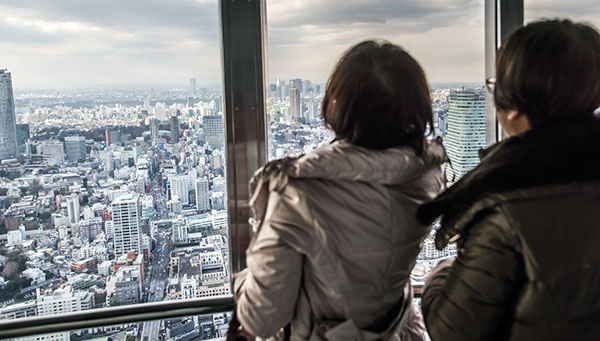 We travel to the beautiful area of Monte Fuji, through pretty countryside on our way. First of all we see the ARAKURAYAMA SENGEN PARK, with its beautiful pagodas, and from here enjoy the best and most well-known views of Mount Fuji. After this we go on to KAWAGUCHIKO with its tiny houses, flowers and mountains, and its beautiful lake. On our arrival, we will visit the FUJI SENGEN SHRINE set in a magical site surrounded by tall trees, and the starting point of the traditional pilgrimage to the mountain. At the shrine, we will express our thanks for being able to visit this wonderful place. The visit also includes a delightful boat trip on Kawaguchiko Lake. After lunch, we start to ascend Mount Fuji on the road that takes us to the “fifth station”, surrounded by spectacular forests and views, to a height of 2,305 metres. Note: In winter, the route up to Mount Fuji is closed due to snow or other adverse weather conditions; during this season, we will ascend as far as the authorised point. Return to Kawaguchiko, with time to stroll near the lake. We will stay at a Ryokan (a traditional Japanese hotel), and have the chance to enjoy its ONSEN (public baths). Dinner included.(NB: In the planned Ryokan, some rooms are in Japanese style, with accommodation on tatamis, and others are in western-style. Accommodation may sometimes be in a western type hotel). 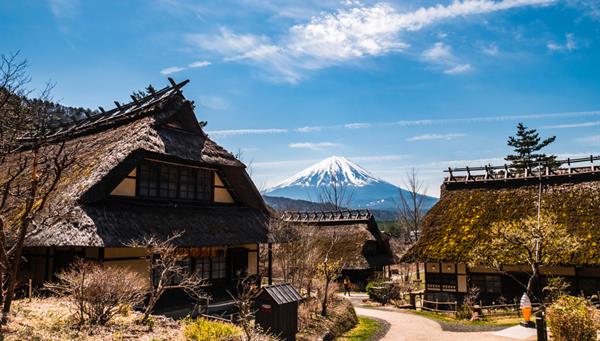 We are only 130km (81 miles) from KYOTO. In the morning, we continue along the pretty road bordered by lakes to IYASHI NO SATO NENBA, a tiny village destroyed by a typhoon in 1966 and later restored as a traditional open-air mountain village and museum. Its traditional houses have been transformed into arts and crafts shops, restaurants and traditional museums. We then have the opportunity to admire the SHIRAITO FALLS, considered done of the most attractive sites in Japan, with a waterfall height of 150 metres. We will then continue to NAGOYA, the third most important city of Japan, on the shores of the Pacific. Here we will visit the TOYOTA MUSEUM (admission included), a must-see for motor lovers. We continue to KYOTO, accomodation. 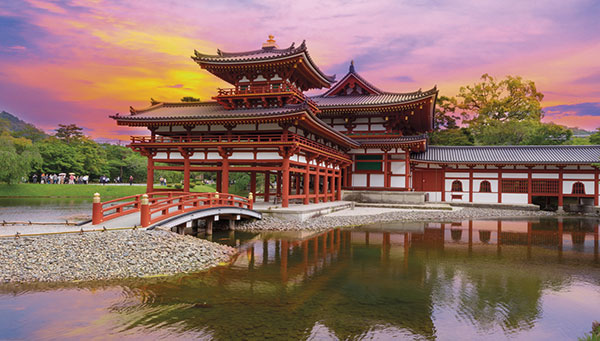 We spend all day in the city that was the capital of Japan from the year 794 to 1868 and home to the Imperial Court. During World War II the city was the only major Japanese to escape the bombardments, and so it still preserves its wealth of artistic heritage; the famous protocol restricting greenhouse gas emissions was signed in Kyoto in 1997. We head for the outskirts of Kyoto to Arashiyama, where we cross the Togetsukyo Bridge ("bridge over the moon"), which has fantastic views. We will visit the Tenryuji temple, one of the "five major Zen temples of Kyoto" and a UNESCO World Heritage Site, followed by a walk through its mystic bamboo forest. The visit includes a trip to one of the most important parts of the city. We will see the marvellous Shinto Shrine of Fushimi Inari, the Imperial Palace and Kinkakuji temple, “the golden pavilion” and its wonderful gardens. Free time before visiting GION, a busy traditional quarter famous for its Geisha. Free time. 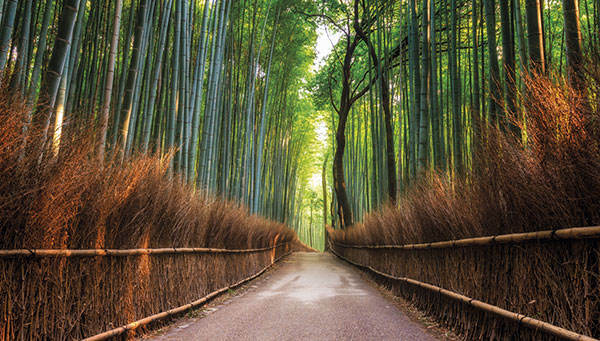 We leave for NARA and visit Todaiji, a magnificent Buddhist temple built in 752, which has a giant Buddha and where passengers can take photos and touch and feed the deer that wander through the park. Lunch included. After the visit, we will see HORYUJI Buddhist temple, a World Heritage Site that includes a seminary, monasteries and temples. Its main pagoda temple is one of the oldest wooden buildings in the world and is the oldest Buddhist temple in Japan and an important place of worship. We continue to OSAKA, where we arrive in the evening. Accommodation in this modern city (Japan’s second city). We will visit Dotonbori, a colourful district filled with nightlife. 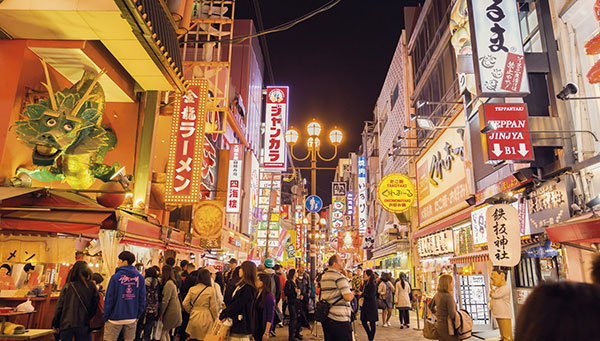 We leave for Mount SHOSA, and its ENGYO-JI complex of temples dating back more than 1,000 years, which was the place where the film “The last Samurai” was made. Cable car ride. After this we will see HIMEJI, where we will include entry to its immense complex that shows us the architecture of Japanese castles. Lunch included in a local restaurant. We go on to OKAYAMA, where we will visit Korakuen, one of the most beautiful gardens in Japan, with its lakes, waterfalls and traditional teahouses. 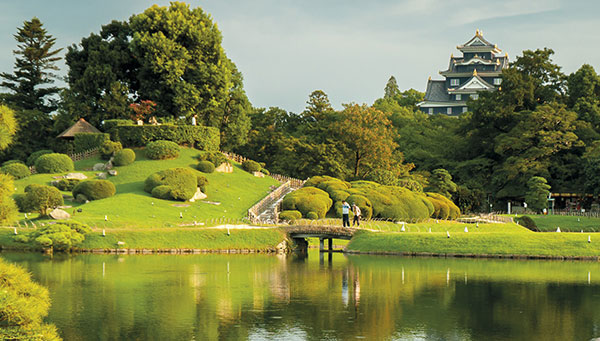 We leave for KURASHIKI, a city with a very well preserved historical centre. Time for a stroll in this charming place with its atmosphere from the past. We continue on our way to HIROSHIMA, a city sadly known for the atomic bomb that fell on it in 1945 and which levelled the city. We will stroll around the Peace Memorial, the Dome of the bomb and we will visit the impressive Museum of Peace. After the war we will seek peace by embarking on a ferry to the island “where men and gods live together”, with the sanctuary of ITSUKUSHIMA dedicated to the guardian of the seas, built partially over the sea. Time to visit the temple, to stroll around its pretty centre and have lunch. Return to our hotel in Hiroshima. Dinner included. Note: The order of the visits in Hiroshima may vary without affecting their content. 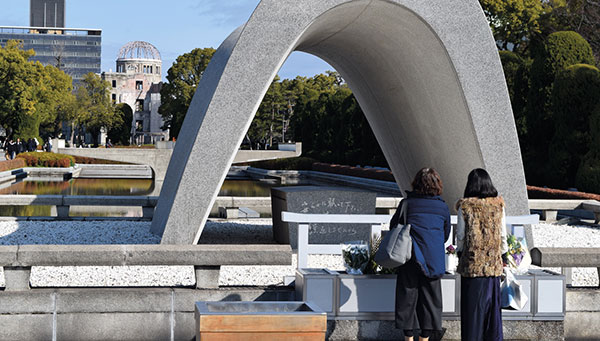 After breakfast, end of our services